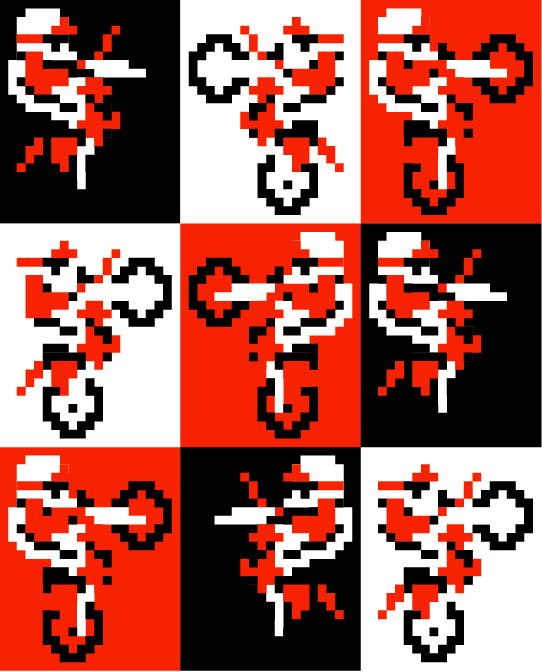 Years ago I regarded cell phones as nothing more than convenience easily justified as necessity. Eventually I ditched the land line and became dependent on my cell phone for much more than just ordering pizza while driving home. Then my cell phone became a smart phone and gradually began usurping other electronic devices I use in my daily life. By upgrading my phone I inadvertently upgraded my codependency. Now it’s my calculator, alarm clock,  internet connection, MP3 player, GPS, camera, camcorder, ebook reader, phone book, calendar, and atlas – just to name a few. And much to my chagrin it’s also a portable arcade. Admittedly I’m not much of a video game enthusiast, more commonly known as a ‘gamer’ or ‘single, lonely, & desperate’. But I did spend a fair amount of my childhood holding a joystick in my hand. For those of you with your mind in the gutter or born after the 80s, I’m referring to a controller that came with the Atari game system. My Atari  helped me suffer through many rainy days and childhood illnesses. Games like Asteroids, Frogger, Defender, Pac Man, and Pitfall provided hours of indoor entertainment when I couldn’t go out and throw rocks at cats or squish bugs. Pitfall proved to be an obsession of sorts – one summer I spent a week straight trying to master it and in the process I devoured over a hundred dollars worth of fund-raising candy I was supposed to sell for my Boy Scout Troop. As I got older I left video games behind in pursuit of more cosmopolitan life experiences. Things like jello shots, wrapping cars around telephone poles, and midget tossing. Luckily I out grew those things as well  – my auto insurance was outrageously expensive and my arms were getting tired. In recent years I’ve come full circle and video games have re entered my life. Not just because I have a six-year-old with an addiction to Wii, but because I have a smart phone that allows me to play dirt bike video games any time, any place. Playing a video game can never compare to the visceral feeling you get when doing the real thing. It’s a game,  nothing more. That being said, I can’t ride my bike while growing old in line at the DMV or dropping a deuce. So for those moments in life when I’m in need of a welcome distraction I reach for my phone to ride, wheelie, and jump myself into a better frame of mind. Here’s three (free) noteworthy games I’ve found for my Android that help me pass the time: BIKE RACE This game sets itself apart from other off road motorcycle games with a different take on terrain. In fact, you’re not riding terrain so much 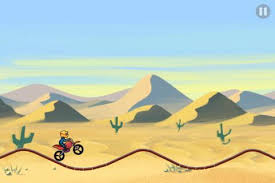 as a single line that has peaks, valleys, jumps, and loop de loops. Think Electrocardiogram readout mixed with one of those little plastic maze games where you try to navigate the BB from point A to point B. There are different levels and stages, with different scenic backdrops behind the line. Out of the three this game is probably the least enjoyable for me as an off road rider. But it is addictive. And even though the graphics are weak they really nailed the crisp harmonious sound of a two stroke engine – albeit a PW50.  TRIAL XTREME 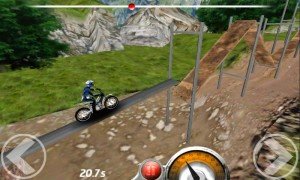 Usually the word ‘extreme’ gives me instantaneous acid reflux. Spelled phonetically it adds a case of hives. However, once I managed to get past the name of this game I was pretty impressed. Trial Xtreme has great graphics and pits a trials bike rider against jumps, ramps, rocks, logs, and concrete obstacles. There’s even a few teeter-totters to ride over. Although some of the obstacles defy gravity, the rider doesn’t – it’s easy to go over the bars or over backwards. Out of the three games this one was the trickiest to get the hang of and the most frustrating. The sound on this game is a little disappointing – it took me a while to recognize that the bike itself sounds just like the industrial toothbrush my Dental Hygienist uses for my semi-annual cleaning. After playing for a bit I began to feel guilty that I skipped my last dental appointment. Other than the ridiculous engine noise I did appreciate the chorus of ‘OH’s’ and ‘AH’s” that follow each crash – a bit of realism and just like riding with my friends. There are newer versions of this game available which I haven’t been bored enough to investigate. Maybe next time I get the flu. MOTO X MAYHEM 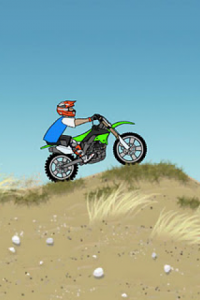 This is easily my favorite game. Riders are challenged by three islands with multiple stages on each. Each stage has a varying degree of difficulty as you jump over hills, across ravines, and off cliffs. There are stone ruins and stairs to scramble over, caves to ride through, a suspension bridge, and even a school bus to ride on top of. Everything I want to ride but can’t because I don’t live in Machu Picchu. Probably the best feature of this game is how much body position affects the bike. Lean too far forward and the front end drops down. Lean too far back and you loop out. Find the sweet spot and you can get great traction on hill climbs, loft the front end off bumps, and wheelie across hilltops just like the real thing. While the graphics are much more simplistic than Trial Xtreme, both games share a bike that sounds like a dental tool rather than a motorcycle. But another nice touch of realism is the potential to rag doll when you crash – complete with crunching sounds, thuds, and the occasional ‘UH!’. As the saying goes nothing in life is free.  Unless you get advertisers to foot the bill. While these games are free, there are advertisements to sit through. To me this is a small price to pay to be able to vicariously feed my riding addiction when life prevents me from experiencing the real thing.